Many MBA hopefuls who have already narrowed down their target school lists are anxiously awaiting the release of the 2019-2020 MBA application questions and deadlines.

While we cannot perfectly predict the future, our 11 years of MBA Admissions Consulting experience and careful analysis of past trends and recent campus announcements can help us to assess what MBA candidates should expect this year!

To begin, let us take a look at which top MBA programs changed their MBA application essays in the past two years: 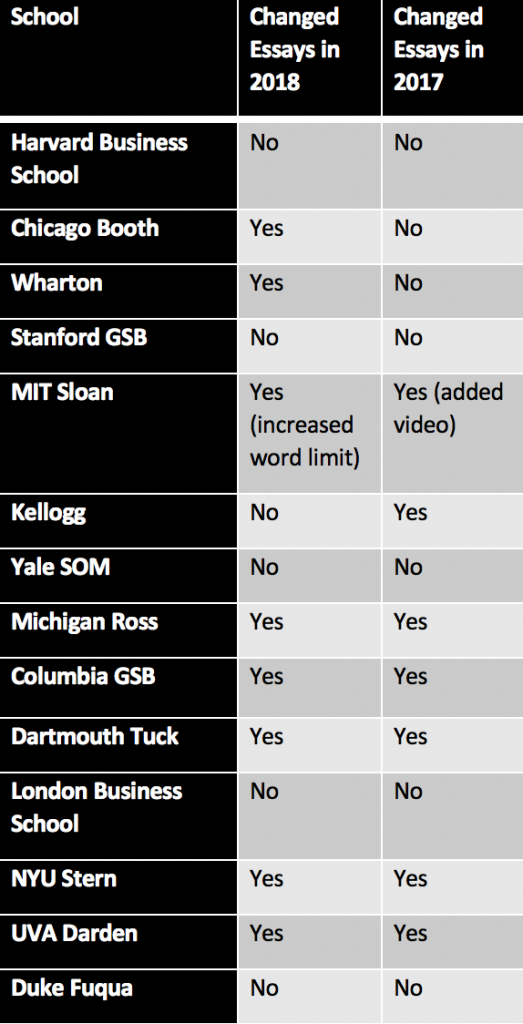 Harvard Business School, Stanford GSB and Duke have not changed their essays in many years. Given this, we would be surprised to see changes from any of these schools this year. If these MBA programs are on your list, brainstorming or even outlining essays now is a fairly low risk endeavor.

Kellogg and Yale SOM are also on our “less likely to change” list.

Kellogg did not change its questions last year and with a new dean starting in August, I would not expect changes this year (though future changes could come).

Yale SOM has been consistent over the last few years and seems to have invested heavily in its unique essay question. SOM has also announced a new dean who will be starting in July, after the expected release of this year’s question(s). A change is less likely for Yale as well.

For other schools, minor tweaks and changes to some questions are more likely based on past behavior.

Wharton has left the first question unchanged for the past few years while making some changes to the second question last year. The year before, Wharton did not make any changes to its essay questions (though did revamp its LOR requirements).

The MIT Sloan cover letter has been a staple for a number of years. However, the school has altered the length in previous years and added additional requirements.

Schools Most Likely To Make Changes

There is a third group of schools which has historically been more prone to frequent changes. This list includes Columbia Business School, Michigan Ross, Dartmouth Tuck, NYU Stern and UVA Darden.

Columbia Business School changed two of its three questions and NYU Stern changed one of its questions last year. Michigan Ross, Dartmouth Tuck and UVA Darden made more detailed changes. All five schools have made changes in each of the past two years.

If these schools are on your list, I would suggest waiting for the release of this year’s questions before putting in major effort into your essays.

However, as I shared in last week’s 5-Month Round 1 Plan, there is plenty you can do now to kick-start your applications.

Keep in mind, the details shared above are predictions only! As soon as this year’s questions are released (which could begin as early as this month) Personal MBA Coach will let you know what has changed and share our advice on how to tackle each question.Join our weekly MBA Tips newsletter to be sure you do not miss anything!

Need personal support? Founded by a Wharton and MIT graduate, Personal MBA Coach regularly helps applicants navigate their applications each year. Our comprehensive support includes mock interviews with a team of former M7 interviewers and customized GMAT/GRE tutoring with tutors who scored in the 99th percentile.

Personal MBA Coach has been guiding candidates through all aspects of the MBA application process for over 11 years with a 96% success rate. Call us today at +1 617-645-2424 or email scott@personalmbacoach.com for a free consultation on your profile along with how we can help make your MBA dreams a reality!